So despite the blog and my internet presence being quite mute as of late i actually have been up to quite a lot. My homemade Lulzbot Mini 3d Printer this summer was a success, amd i have constantly been improving it. At some point i will take some photos of it’s final progress. A few of my pea breeding crosses from last year were successful, including one i’m excited to grow again which is a cross of the Purple Passion dark purple seeded pea (which is a small genetically weak pea variety) with another stronger pea variety. That should produce something really cool in the coming years. And this fall and next spring i’m experimenting with school by going through a Precision Machinist course and am learning how to use milling machines, lathes, and CNC equipment to produce Aerospace quality components. Not sure if that’s something i want to do long term, but they are skills i’m interested in and can use throughout my life. So that’s new.

Anyway though, as a throwback or a revisit to my post in 2010 titled “Do Plants Really Need Sunlight?“, which has actually been one of the most visited posts on my blog over the years, i finally got around to building a few of those coils that sounded so interesting.

So the basic premise or idea behind using a coil of wire with electricity is that it produces a small amount of electricity or a magnetic current through the air. This is the same idea Nicola Tesla was after all those years ago when his imagination was captured with the idea that everything could have wireless electricity. And in many cases his dream has come true with an ever increasing amount of technology these days using induction to wirelessly power or heat things. The basic premise of applying this technology to plants comes from an article i read once that talked about how researchers were able to measure a small direct current from trees in a forest by placing nails in them. They then had ideas about placing nails in many trees and hooking them up together to power small electronics like a battery or cell phone charger, or a smoke alarm. Basically all plants (and maybe all living things) produce a bioelectric field of energy. If one can tap this field to harvest electricity, then why cant we tap into it and feed these plants with extra electricity to help them grow.

One question i asked in my old blog post was if plants even need sunlight at all as long as they are getting some form of energy to grow. I still haven’t done an experiment to test that idea, but it’s still an interesting question. Because it makes me wonder if there are ways plants could be grown in complete darkness.

Regardless, this summer i finally built a prototype plant coil. I built it rather late in the season, so i really wasn’t able to give it a good test. My original plan was to plant 3 or 4 genetically identical tomato plants near each other in the relatively same soil with at least one plant being the control. I was then going to observe over the course of the summer f the tomato plants within the coils had larger and better growth than the control. That was plan anyway, i just didn’t quite get to it.

You can see here we were trying to use a volt meter and another coil to see if we could detect that our coils were working. We weren’t having much success with the meter in the beginning and i don’t remember if we did later after increasing the power supply a bit. But in theory you should be able to measure with a second coil.

I placed it on three smallest tomato plant clusters in the very late planted tomato patch. Interestingly enough, the three plants it happens to be on might be the only three blue tomato genetic varieties that survived my haphazard tomato disasters this year. Since placing the coils on these plants i have noticed an improvement in them and they have since catched up to the growth of the other tomato plants in that spot. Although at the same time i did also make a furrow and started watering them more. But even so i’d be willing to go out on a limb and say that the coils did help them go from “runt” status to catching up to the others. I may yet get a few tomatoes from the larger two before winter hits. Thanks to Gilbert for providing the motivation to actually build this project. And a thanks to the Homegrown Goodness plant breeding forum where i get so many of my adventurous gardening and plant breeding ideas. You guy’s are the best and a continual inspiration to me. Read more: http://alanbishop.proboards.com/thread/8623/breeding-tower-potato-ideas-wanted?page=13#ixzz4LoiDtFZE 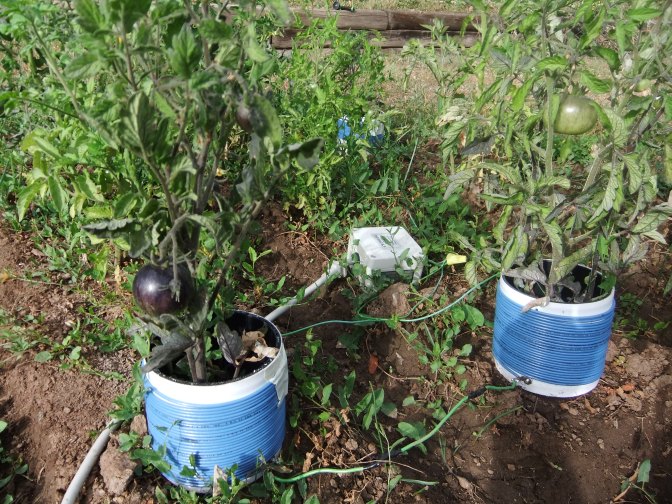 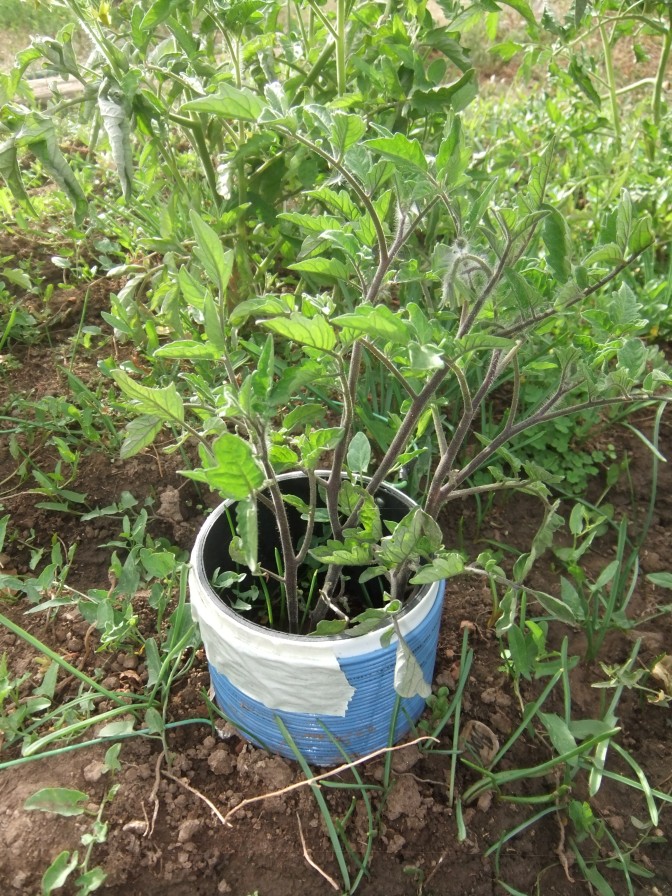 So, while my experimentation was a bit haphazard this year i think i still did ok. It was a fun project that went from an interesting patent to a cool project idea in my head and at the back of my mind, to a fully functional project / prototype. Plus i think these coils look cool. haha.

But it makes me wonder what other cool patents are out there that i can exploit, reverse engineer and build to experiment with. One of my next projects i think will go the opposite route and will be heavily steeped in Open Source as i think i will try and build a “Food Computer“. Basically it’s a small climate controlled aeroponic grow box. It should allow me to continue my plant breeding efforts even in the winter which is really what i want. Plus it will allow me to learn more about this “urban gardeng”, “vertical gardening”, and “aeroponic” stuff. I can’t wait to get back to pea, bean, and tomato breeding even though the summer and fall are waning fast. I think i’m going to repurpose my 2ft x 2ft t-slot frame that i was intending to turn into a large 3D printer and/or CNC mill. But it’s still going to be a long time before i finish that project, so i figured hey why not actually use it for something useful in the meantime! So.. that’t the plan.. 😀

Heck yeah. I think mail delivery people are hero's! Just a guy working two jobs, one at a Robotics Company and one at Colorado State University. I have a very wide array of skills and interests. Some of them include Plant Breeding, Genetics, 3D Printing, Open Source Electronics, Robotics, and Graphic Design! View all posts by Andrew Barney