Skip to content
HomeIn [2017] I bred A New Pea Variety With Purple Seeds!

these are new F2 seeds recovered from some pea crosses i did i think in spring/summer of 2015. So two years ago. This one is the descendant of a cross done between a rare, and nearly extinct variety of pea that has a dominant gene for having a purple testa color over the seed coat. The parent variety called ‘Purple Passion’ has small round dark purple seeds and grows on thin wispy and pathetically weak vines. Hardly seems domesticated at all. The other parent of the cross was a “super dwarf”, or Extra Dwarf as some literature calls it, of a short (1-2″ tall) but robust pea with thick stems, big leaves, large seeds, and a charming personality. For a plant that is. Not that plants have personalities, but whatever. The result in the F2 generation is this. A large good sized seed with the characteristic dark purple testa seed coat color. Pretty awesome. I’m excited to furthur grow this line out and see what it becomes. This is different from the Brick-red seeded peas known as ‘Biskopens’ or ‘Sweedish Red’, which are a brick-red color rather than dark purple / violet and which is a recessive trait rather than a dominant one. Biskopens is a neat variety in it’s own right, and i have recovered some interesting F2 recombinant offspring from some crosses of that variety as well.

Not sure what i should name it yet. Depends on what it turns into really. Assuming i was able to recover the “super dwarf” genetics at some point i might name that substrain something like ‘Purple Midget’ or something like that. haha 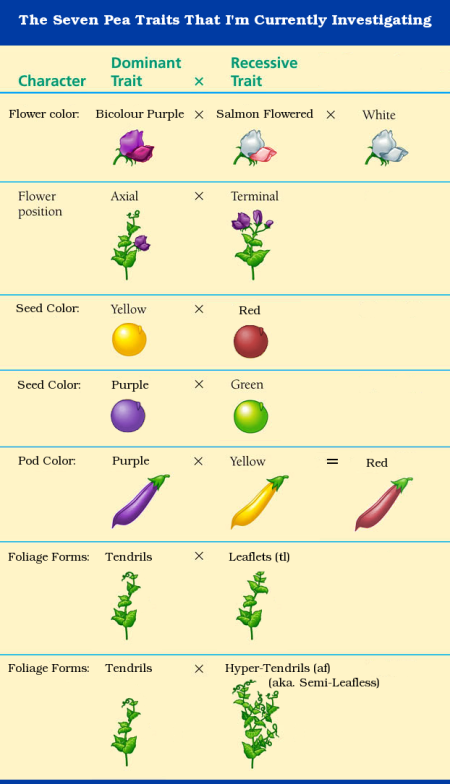